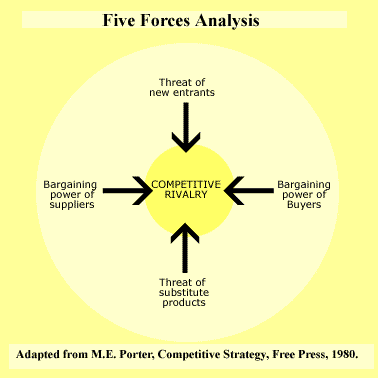 Five Forces Analysis helps the corporate strategist to analyse and evaluate a competitive environment. Porter (2008) says that strategy is considered ‘too narrowly,’ and the the Five Forces allows strategists to consider more market dynamics. For example, he reasons that digital technologies are a dynamic drivers of the competitive environment, and so Five Forces can be used to evaluate new and innovative digital industries.

The threat of entry.

The bargaining power of buyers

The power of suppliers.

The power of suppliers tends to be a reversal of the power of buyers.

The threat of substitutes

Of Course, Five Forces Analysis is more complex than this brief lesson 🙂 However, take a look at this Harvard Business Review Article which includes an interview with Michael Porter.